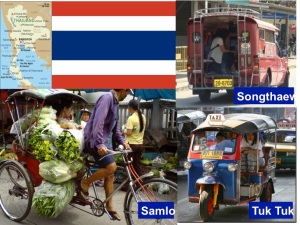 This fun icebreaker is based on three types of public transportation in Thailand:

This icebreaker energizes and adds some silliness to a workshop.  Because the words are unfamiliar and a little challenging to remember, it requires focus and concentration.

·      Print out the pictures of the vehicles in the file called, “Samlo, Tuk Tuk, Songthaew – Photos.pptx”  You can download it on the Lesson and Material Downloads page at http://www.teachingthem.com.