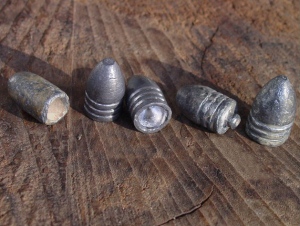 In 1847, French Army captains Claude-Etienne Minie and Henri-Gustave Delvigne developed a new technology called the Minie ball.  This new type of bullet was an innovation that improved the accuracy of rifle muskets, because it took advantage of the gun’s spiraled grooves inside the barrel (“rifling”).  When the rifles were fired, hot, expanding gas pushed on and deformed the Minie ball so that it connected with the spiraled grooves and spun as it traveled down the barrel.  The spin made the bullet more accurate, and the seal created when the Minie ball changed shape pushed the bullet faster and gave it a longer range.
Older muskets fired simple, round bullets that were accurate only at short range, so soldiers that used them had to advance shoulder-to-shoulder and get within yards of the enemy to have any hope of hitting anyone.  However, with a rifle musket and Minie ball ammunition, this was no longer necessary.  The tradeoff for the new technology was that the soldiers couldn’t just point and shoot.  They now had to learn new skills to improve their aim, since they would be firing from much further away.
This new technology became popular right about the time of the American Civil War, but military commanders were slow to change their tactics.  Having learned their strategies in earlier conflicts with different types of weapons, they didn’t see the potential of the new technology and continued to line up their troops for close-range attacks on the enemy positions.  As a result, they experienced terrible losses on both sides until they began to change how they trained and deployed their troops.*

When a new technology has the potential to impact our work, it’s time for us to adopt different tactics. However, the pace of change is increasing, and the number of new tools out there makes it difficult for us to know what is useful.  Plus, we have been operating in a different paradigm (way of thinking about our work).  It’s not always easy to see the potential of new tools.  So, here are a few ideas that might help:

As leaders, it’s often up to us to model the way by challenging ourselves out of our comfort zones and learning which new tools give us a strategic advantage.  This doesn’t mean we have to be the technology experts, but it does mean that we have to create opportunities for our teams to show us new ways to create more impact.

One response to “When Technology Changes (ANECDOTE)”