Tag Archives: You know I love you 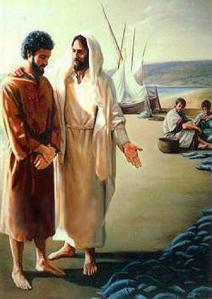 Peter denied knowing Jesus three times.  After Jesus rose from the dead, he reinstated Peter to leadership of the church by giving him three opportunities to express his love for Jesus.  In this activity, children will try to knock down three cans labeled, “I don’t know him!” with beanbags or balls labeled, “Yes, Lord, you know I love you!”

Tagged as Do you love me?, Restored, You know I love you