Moses, Aaron and Hur vs. the Amalekites (GAME) 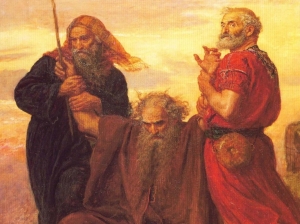 Use this script or modify to suit your needs.

Tagged as Aaron, Amalekites, authority, conflict, Depending on God, Hur

Description:    This lesson leads up to and covers David’s anointing to be king and focuses on how God looks at the heart of a person rather than his outward appearance.  It starts with Saul’s anointing as king and covers the history of what happens in the early years of his leadership.  The lesson is part of a series that deals with David, so you might want to cut parts to tighten it up if you are just focusing on how God chooses leaders.

Materials:
o    Crown, scepter and cape for the king
o    “X-ray machine” (see instructions below for making it)
o    “X-ray images” from the “God Chooses Me – X-Ray Hearts.ppt” file (see the Lesson Materials and Downloads page on http://www.teachthem.wordpress.com).
o    PowerPoint file with maps and animations – called “God Chooses Me – Maps.ppt (see the Lesson Materials and Downloads page on http://www.teachthem.wordpress.com)
o    Laptop/desktop computer, projection screen and LCD projector (alternatively, you could draw a map of Israel on a flipchart or whiteboard and cut out the pictures mentioned in the lesson to stick to the map as you tell the story.  You can find the clip art pictures in the file named, “God Chooses Me – Pictures.ppt on the Lesson Materials and Downloads page on http://www.teachthem.wordpress.com)
o    Olive oil to anoint David.  (You can put it in a bowl or a flask, depending upon whether you want to pour it over the volunteer’s head or just smear it across his forehead.  If you pour it over his head, do so sparingly.  It’s difficult to get the oil off afterward, and you will want to be careful not to get it into carpeting.)
o    A towel or something that the David volunteer can use to wipe off the oil after the anointing.

Preparation:
o    Create “x-ray machine.”  Take a piece of poster board and cut an 8”x11” hole in it.  Draw some knobs and buttons on this frame to make it look like a machine.  Tape a clear, plastic sheet protector onto the backside so that it covers the hole.  Print the x-rays from the “God Chooses Me – X-Ray Hearts.ppt” file (see the Lesson Materials and Downloads page on http://www.teachthem.wordpress.com).  Organize these in the same order that they are in inside the PowerPoint file, and slip them into the sheet protector.
o    Put oil into a container and set it where you can get to it.
o    Put the towel somewhere close by.
o    Set up your LCD projector, screen and laptop/desktop or draw a map of Israel on a flipchart or whiteboard (In this lesson, when it talks about putting up pictures, it means you should advance the slide if you are using the PowerPoint.)
o    Print out the pictures to use while telling the story (if you are using a flipchart or whiteboard)